Publicity of the Fish For Kids Events

The day included casting and reeling lessons, minnow races, and fishing arts and crafts. Fishing raffle prizes were also given to every child.

This is the second year the event has been held in De Pere.

DE PERE — Give a man a fish and yadda, yadda, yadda. Teach kids to fish and you’ll hear exclamations of excitement for years to come.

Kelly Galler of De Pere didn’t have to wait long. Shortly after son Matthew, 9, dropped his line into the Fox River on Saturday, he was pulling up a small rock bass and no doubt filing away the fact that he beat brothers Max, 11, and Mason, 9, to the punch.

They all were participating in the Fish for Kids program, which founder Tony Goebel brought to De Pere for the first time this year. Goebel, 24, founded the program seven years ago in Fond du Lac, but he moved to De Pere this year and held the event Saturday in Voyageur Park.

At stations around the park, participants learned to tie knots, cast, identify types of fish, wrangle worms and to avoid spreading invasive species. “They were excited about learning some things they didn’t know. And prizes, of course. They want more fishing stuff,” Galler said of her three sons.

Prizes and fishing stuff were part of the lure. Goebel’s nonprofit organization, supported by such businesses as Scheels sporting goods and Federated Insurance, gave fishing poles to every kid that didn’t have one, hats to all and assorted other goodies. Goebel estimates it costs between $35 and $40 per child to hold the event.

Ean Schmieder, 11, of Green Bay has fishing experience, but took his turn practicing his casting. He was one of the few to put his practice lure in a wading pool about 25 yards away. His biggest fish has been a bass, “about this big,” he said, holding his hands a body width apart. “I think this is wonderful,” said Ean’s grandmother, Cheryl Schmieder. “All the volunteers giving their time. It’s great.”

Dave Westphal of Green Bay was in his second year of volunteering. He was teaching kids to tie knots. “The kids have just a blast,” he said.

Chad Giese of Green Bay, who brought daughters Cheryl, 9, and Marissa, 6, said the event was a good bonding opportunity. “I don’t have boys. It’s good to pass it on to my daughters,” he said. He said the girls like to fish, though they were slow getting started Saturday. “They got up early this morning. They weren’t too happy with dad,” he said.

Goebel said he works with the state Department of Natural Resources to provide instruction about boater safety and invasive species. That was information that stuck with Matthew Galler, who said he learned about not moving fish from pond to pond. “Invasive species can affect the environment,” he said.

Holding the event in the Green Bay area proved a wider draw than previous year’s events in Fond du Lac and Oshkosh, Goebel said. Participants on Saturday came from Milwaukee, Manitowoc and Ripon, which he attributed in part to the attraction of the Green Bay Packers.”I had a group say they were going to come here and enjoy the event and then go to Lambeau Field,” he said. Goebel said 80 kids participated in the three-hour event, which ended with miniature fishermen and volunteer helpers lining the shore of the Fox River, trying out their new skills.

Fish for Kids to cast its lines in De Pere

Nonprofit organization hosts event to teach children about the sport

Seven years ago, a 17-year-old high school student from Fond du Lac wanted to make a difference in the world.

Tony Goebel, now 24, was sitting in a creative writing class when he was motivated to create a nonprofit organization for children.

“This 15- or 16-year-old kid started a nonprofit organization that gave hats to kids that were cancer patients,” Goebel said. “I wanted to make a difference, too, and I said if he could do it, I could too.”

Goebel’s older cousin had cancer, and of the many things they liked to do together, going fishing took the prize. As a way to share their love for the sport with others, Goebel created Fish for Kids, his first nonprofit organization.

“I always loved to fish,” Goebel said. “And I liked kids, so the two came together.” Each year, the organization hosts a free fishing event for children to learn about the sport. It started in Goebel’s hometown of Fond du Lac; this year the event will be held in Voyageur Park in De Pere.

From 9 a.m. to noon July 23, young anglers will learn how to cast their fishing poles, identify fish and tie knots. All ages are welcome; however, it’s geared toward children in fifth grade and younger.

Space is limited, so parents are encouraged to sign their children up as soon as possible.

“It’s just a fun family event that everyone can enjoy,” Goebel said. “The parents too can learn a lot.”

Owen Fawcett, 4, of Ledgeview picks up a worm Saturday during the Fish for Kids event at Voyageur Park in De Pere. Fawcett and other children learned how to put a worm on a hook during the event.

Fish for Kids Taught Life Lesson – ‘Letter to the Editor’

I would like to take this opportunity to publicly thank Tony Goebel. What a fine young man his parents have raised.

This hardworking, organized and altruistic teen organized “Fish For Kids”, an event that shows kids the joys and responsibility of learning the fine art of fishing.

All the sponsors deserve a huge thank you also for supporting such a wonderful event.  I wish they could all have seen the excitement on these young faces due to the donations that made the event a reality for young kids.

Every child walked away that day with something that they can build on for a lifetime and have the basic knowledge needed to participate in a great sport. Like the saying goes “It is a little hard for a kid to get into trouble in the middle of a lake with a fishing pole in his hand.”

Thanks Tony, for starting these kids off with the interest to last a lifetime.

Activities, all free, included a casting contest, information on bobbers and knots, and fishing. Kids also had a chance to speak with a professional fisherman.

Jennifer Pflum, 10, of Rosendale, fishes off a pier during the annual Fish for Kids event on Oven Island Saturday at Lakeside Park. (The Reporter photo by Patrick Flood)

Just a mere 5 years ago, Tony Goebel of Fond du Lac started an event to introduce children to fishing. “Fish for Kids” is a non-profit organization designed to show children the positive effects of fishing and the outdoors. They introduce children to a sport that teaches them patience and determination and brings families together. According to Tony, “Our mission is to give children the knowledge and tools to continue fishing in the future and to build lifetime memories.”

The Fond du Lac event is in the morning of Saturday May 30th, followed by an afternoon clinic in Oshkosh the same day. Every child attending receives a free t-shirt, snacks, and fishing gear. They also have the opportunity to win larger fishing gear like brand new fishing poles and tackle boxes. The 2009 event will feature a 600 gallon fish tank (provided by the DNR) full of the fish in the Wisconsin waters. Each kid can participate in a casting contest, a fish identification game, fishing arts and crafts, knot tying including a slip bobber lesson, minnow races, and the exciting fish tank. Next the children are off to grab their parents, a volunteer, and a box of worms to begin fishing in the channels.

The event is limited to 200 children, so registration is a must (they do not want to disappoint any future professional anglers). The link to sign up is http://www.fishforkids.org/. Fish for Kids is also taking donations from area business to help supply the children with equipment.

My Fishing Partner LLC has taken on a gold membership sponsorship for the event. Mark Schram, Founder of My Fishing Partner, will be on hand in Fond du Lac to help in the festivities. Having been a family friend of the Goebel’s for nearly 30 years, you could not ask for a more genuine family to put this event together with a kid’s first approach.

Several local businesses have teamed up to sponsor the free event and have donated many prizes, all related to the sport of fishing, to be awarded to participants.

Registration is required and can be filled out online at www.fishforkids.org. If anyone has trouble downloading the form or needs help completing it, call Tony Goebel at (920) 251-9004.

The event is designed for children in kindergarten through fifth grade. Participants will receive a T-shirt, free fishing gear, and lunch while enjoying the arts and crafts display and the visits of professional fishermen. Early registration is advised and encouraged 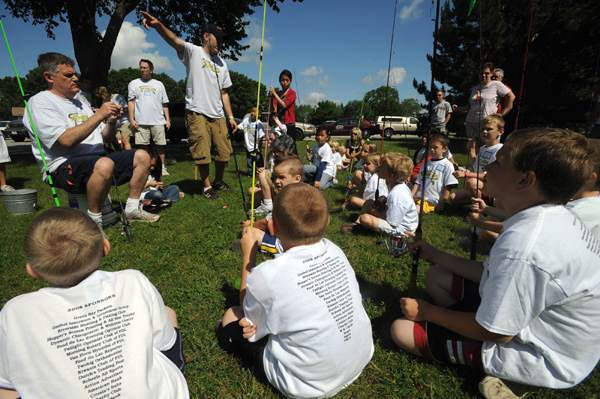 Anthony (Tony) Goebel, president and founder of Fish For Kids Charity Foundation, gives instruction to children during the Fish For Kids event on Oven Island at Lakeside Park in Fond du Lac, Saturday, June 28, 2008. The Reporter photo by Justin Connaher. Keegan Kind, 6, of Fond du Lac, listens to instruction during the Fish For Kids event on Oven Island at Lakeside Park in Fond du Lac, Saturday, June 28, 2008. The Reporter photo by Justin Connaher. 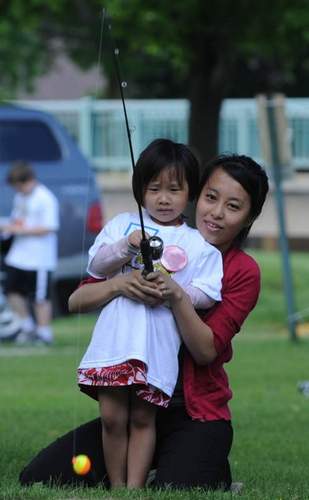 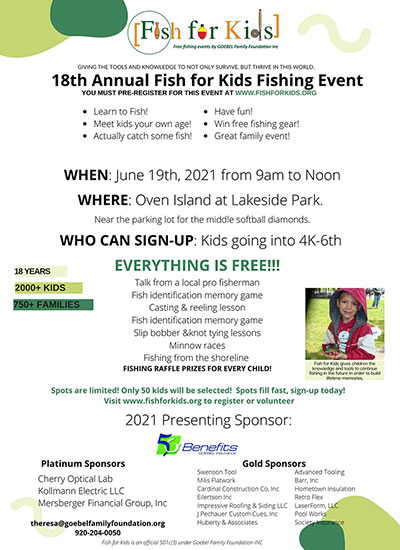 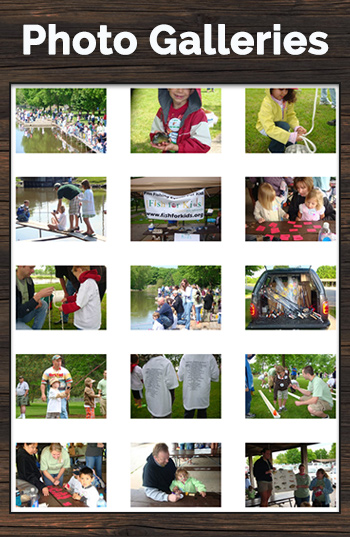